Makai Ocean Engineering (Makai) is a world renowned engineering firm for  marine intake and outfall projects. Makai has designed and helped marine contractor’s successfully install many of the world’s longest, deepest, or largest high density polyethylene plastic pipes in both the world’s ocean and lakes. These projects include our most notable projects in Hawai`i, Egypt, Bahrain, Toronto, Canada, and United States, among others.

While most of these projects have featured extruded HDPE pipelines, up to 2.0 m in diameter, in 2021 we took on the challenge of  designing a safe deployment method for the very large diameter structured pipelines (2.9 m intake and 2.8 m outfall) of the Al-Jubail SWRO Desalination Plant in Saudi Arabia. These pipelines supply and discharge seawater to and from the world’s largest desalination plant and are the largest pipelines that Makai has helped install.

Structured” pipelines are constructed by spirally winding and simultaneously fusing an HDPE profile around a mandrel. In this case, the structured profile consisted of smooth inner and outer walls with hollow circular cavities in between. The advantage of this construction method is that high ring stiffness pipelines can be fabricated at lower cost. The disadvantage is that the pipe’s structural integrity is more dependent on manufacturing quality control. This type of material is generally not used in marine pipelines that experience high bending stresses during installation. 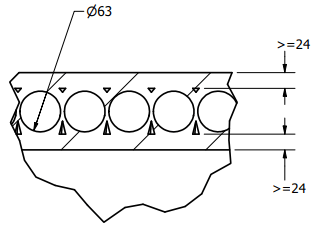 While these pipelines are located in relatively shallow water compared to many of Makai’s previous projects, their large diameter, heavy ballasting, structured construction, and weak manhole joints made for a challenging deployment.

Normally marine HDPE pipelines are installed using the controlled submergence method. This method allows the pipeline to be fabricated on land, towed out to sea air-filled and controllably submerged by pumping in water from one end. The process is extremely efficient, as it allows an entire pipeline to be installed in one day compared to the traditional segment-by-segment method which can take months. During the controlled submergence process the flooded pipeline section becomes heavy and sinks to the seafloor, while the air-filled section remains floating on the surface. The difference in submerged weight between the two sections causes the pipeline to take an S-shape and creates bending loads at the top and bottom of the “S” bend.

Makai analyzed the installation of the Al-Jubail pipelines using the industry standard controlled submergence technique and determined that the heavy ballasting would generate bending loads that would exceed the limits of the structured pipe and manhole joints. A special installation method was required to minimize stresses in the pipeline.

The Makai team recognized that reducing the pipeline’s submerged weight and utilizing a two-stage deployment method would significantly reduce the bending loads experienced by the pipeline. To reduce the pipeline’s submerged weight, Makai used air-filled Mono Buoyancy Units (MBUs) to lighten the ballast blocks. To split the submergence process into two stages, Makai used a second set of MBUs to support the pipeline after flooding. During the first stage, the floating pipeline was flooded until it hung suspended from the supporting MBUs approximately 5 meters from the bottom. To lower the pipeline to the seafloor, the supporting MBUs were sequentially vented.

Makai and the marine contractor worked together to develop a method that was practical and safe. Makai used Orcina OrcaFlex software to simulate the Al-Jubail pipeline installation. The simulations allowed the team to test different deployment methods and configurations until an optimal solution was reached. Using this tool Makai was able to develop a deployment method that the marine contractor could comfortably execute and that minimized stresses on the pipeline during installation.

This pipeline was successfully deployed according to the deployment methodologies Makai developed. This pipeline is now in operation and is officially the largest diameter pipeline installed with Makai’s assistance.

If you have a challenging marine pipeline project, please reach out to the team at Makai Ocean Engineering for design and modeling work. Our team is experienced in handling some of the most challenging engineering problems in the marine world!

ALEXANDER LE BON, P.E., joined Makai in 2011 as a Mechanical Engineer, and is now a Sr. Mechanical Engineer working in the Subsea Technologies and Marine Pipeline Design groups at Makai. He has been the lead engineer and project manager on several industrial intake projects and federal R&D projects. His skills and specialties include CFD, FEA, and CAD modeling of large pipelines, intakes, and other subsea systems. He received his M.S. degree in Mechanical Engineering, from the University of Hawaii.

HERMANN KUGELER, joined Makai in 2018, and is the Vice President of Business Development. In this role, he leads the team’s efforts in the early stage of projects, including client interaction and proposal preparation for projects, both within the U.S., and internationally. Hermann is involved in both commercial and federal projects spanning Makai’s areas of expertise and services. He was born and raised on Maui, Hawaii, and received his B.S. degree in Mechanical Engineering, from the University of Denver.

Interested in learning more about this project or Makai’s other work?
ReACH OUT!